The Difference Between Voles and Moles

If you’ve noticed mounds of dirt in your yard, tree root-type lines in your lawn or garden, or dying grass, perennials, or shrubbery, you may have an infestation of either ground moles or voles. While neither of these small mammals poses a direct threat to your family, they can severely damage your yard and even transmit disease through urine and feces.

Whether you have a mole or vole problem, to permanently eliminate them, you’ll need to identify which of the two lawn pests you have in your lawn. Here are a few characteristics that you can use to tell them apart: 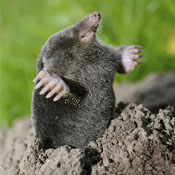 Ground moles have black, cream, brown, or gray fur, weigh between 4-6 ounces, and are about 6-8 inches in length. You can identify moles by their long, pointed, hairless snouts, large flipper-like feet with prominent claws, and eyes and ears so small that they are not easily visible. Voles are smaller than ground moles, weighing about 1 ounce and measuring around 3-5 inches. Voles look similar to field mice with thick brown or gray fur, though voles have smaller eyes and ears, stouter bodies, and shorter tails.

No, moles are not blind, though they are colorblind and can only make out shapes and movements. Instead, moles rely on their strong sense of touch, using their snout and rounded feet.

No, voles are also not blind, though they supplement their poor eyesight using their small body shape and sharp claws to guide them through the soil.

When are moles most active?

Ground moles are active day and night, more commonly in spring and summer after a rainstorm.

Despite the common misconception, moles do not hibernate, though they dig their tunnels further into the ground to avoid frozen soil during colder months.

When are voles most active?

Similar to moles, voles are active at all times of the year, day and night.

No, voles do not hibernate. Instead, they commonly spend the winter foraging under the snow, which is why you won’t notice any damage until spring when the snow has melted.

What do moles eat?

Moles are insectivores. These shrew-related mammals feed on beetle larvae, beetles, grubs, spiders, and their favorite – earthworms. A few species of moles feed on more than just insects, such as the star-nosed mole, which will feed on fish and aquatic invertebrates.

What do voles eat?

A ground mole digs tunnels underground, usually around 10 inches under the surface. They spend most of their lives underground, though they generally enter and exit their tunnels through molehills.

While some types of voles burrow tunnels as deep as 12 inches, most create shallow tunnels to give them easy access to the roots systems of plants. The tunnels have openings around 1.5-2 inches that are typically hidden beneath shrubs or spreading plants.

Both of these pests cause similar damage, resulting in a lawn that is typically difficult to repair.

In their search for insects, ground moles can damage grass, flower beds and tear up tree and shrub roots, though the most apparent yard damage includes volcano-shaped surface mounds, which cause cosmetic damage.

Voles feed on plants and gnaw on roots, leading to many plants and grasses dying off. While they spend a lot of time in their deep, underground tunnels in the summer, they commonly burrow directly under thick snow covers, causing severe damage to your lawn.

How to get rid of moles and voles

While you can try to protect your yard and plants from ground moles and voles by mowing your lawn regularly, clearing heavy vegetation covering and woodpiles, or planting natural repellents like daffodils, these methods are not very effective and don’t offer lasting protection.

The easiest and most effective way to get rid of moles and voles is to call a lawn care company like Blades of Green. Using a combination of specialized bait, traps, and repellents, we offer recurring mole and vole removal services.

Armyworms – What They Are & Look Like, & How to Treat